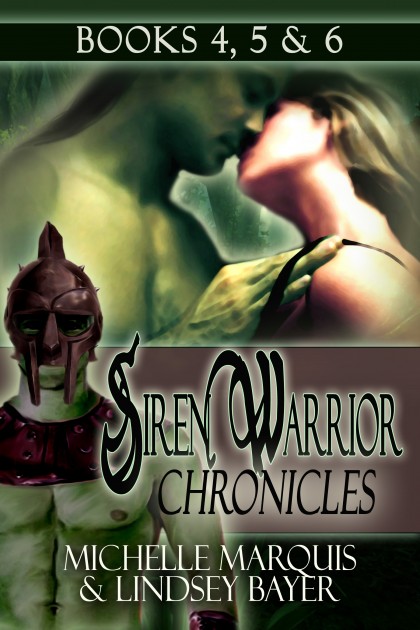 Novels 4, 5, and 6 in the thrilling Erotic Romance / Science Fiction Siren Warriors series from authors Michelle Marquis and Lindsey Bayer, including: SIREN WARRIOR BOOK 4: PRIMAL FEVER: Gypsy Theron has made it to the military academy and is on the threshold of a promising career. But no sooner does she start her schooling when disaster strikes. For ‘although she looks human’ within her beats the heart of a true AEssyrian woman and Gypsy is about to experience her first fertile season. General Kharon is a colossal male and visiting instructor charged with teaching his students the art of specialized weapons. Unfortunately for him, one of his students is none other than his arch rival’s daughter, Gypsy Theron. At least this time surrendering to the enemy never felt so good.
SIREN WARRIOR BOOK 5: SAVAGE PURSUIT: In a remote AEssyrian town, the unthinkable has happened. While caring for the villagers in a local town clinic, Doctor Harlan Ambrose has been kidnapped by a group of criminals intent upon using her to save one of their own. But what these males don’t realize is that General Gavin Theron’s wife is the worst hostage they could have taken and Gavin will never stop hunting them until he recovers his beloved wife, dead or alive. Now Gypsy Theron, in her first campaign ever, must join her father in a desperate mission to save her mother from certain death. And what she will discover about herself along the way will not only make her stronger, but will change her forever.
SIREN WARRIOR BOOK 6: RECKLESS BETRAYAL: Now that Gypsy Theron has completed a successful campaign to rescue her mother, she is finally able to settle back into her life and build a career. Just as everything seems to be returning to normal, Gypsy is dealt another emotional blow. She discovers that not only is her beloved Caraculla getting married to another woman, but Gypsy herself has been claimed in AEssyrian Marriage by that treacherous brute, General Kharon. Determined to convince the general that he must release her, Gypsy arranges a secret meeting with General Kharon only to be taken prisoner and whisked away on a steamy hostage honeymoon. Will she be able to resist the Primal Fever long enough to escape him, or will her budding career come to an abrupt end as Gypsy becomes the exclusive property of the commanding General Kharon?