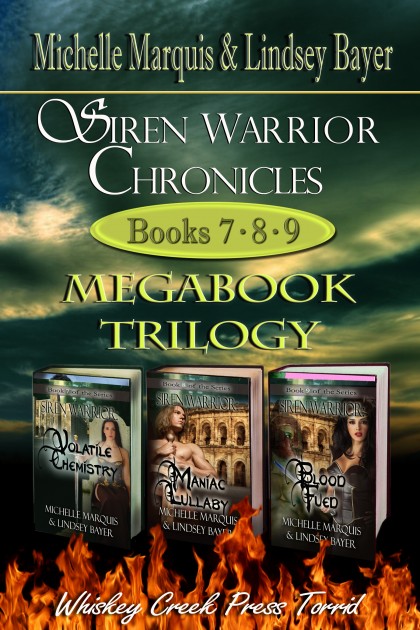 Siren Warrior Chronicles Book 7: Volatile Chemistry: Now that Gypsy is finally free of General Kharon, it’s time to get on with her life and career. But the young cadet has overlooked one thing in her haste to resume her life: her wicked grandfather, Titan. Without his help, Gypsy would never have escaped Kharon’s prison. To make matters worse, Gypsy knows Titan never does anything for free. Someone she loves must have gone to Titan for help and struck a deal. The only question is who would have done such a thing? And will she find Titan’s victim before this evil bargain devours everyone she loves?

Siren Warrior Chronicles Book 8: Maniac Lullaby: Doctor Scarlet Jonson is in big trouble. Because of her beauty, the poor human doctor has attracted the attention of the Emperor who wants her for his harem. In order to save her, Desmond and Gavin have embarked on a mission. If they can find a human slave to distract the Emperor, Desmond can marry Scarlet and take her off the market. But when they buy the slave Lilly, not only does she not solve their problem, she threatens to drag the whole empire into a bloody civil war, with Gypsy right in the middle!

Siren Warrior Chronicles Book 9: Blood Fued: Something is very wrong with Gypsy’s ex-husband, Colonel Caraculla. Crazed with jealously over Gypsy’s marriage to his rival Kharon, Caraculla has managed to get himself banished to the Imperial frontier for insubordination. But the handsome colonel is not done trying to win his beloved Gypsy back. Worse still, the colonel is a nasty opponent, having been schooled in the fine art of treachery by none other than the General himself. Overcome with passion, Caraculla vows to get Gypsy back in his bed once again, even if that means he has to kill her husband to do it.